Guardian, October 2018
'..the ensemble at its virtuosic best'

The Devil Inside – Stuart MacRae

“Scored for just 15 players, MacRae’s music was tautly drawn, angular and intense as conductor Michael Rafferty relished the swings between orchestral lyrical richness and exposed, nervy solos and ensembles to reflect the strange twists of the tale.”

“Some of the instrumental combinations and disquieting riffs were so striking, so otherworldly, that I found myself peering into the orchestra pit to see how he had done it. It is all precisely conducted by Michael Rafferty and powerfully put across by the singers.”

"What really impressed, however, was the playing of a largely Korean ensemble of freelancers given barely ten hours of rehearsal before stage rehearsals. Thanks to the conducting of Michael Rafferty, the 18-piece orchestra (including 12 Koreans) brought a sense of tightness, urgency and precision to the drama."

Michael Rafferty guided the superb MTW ensemble with an unerring sense of pace and elegance through the whole evening.

"With Michael Rafferty conducting, the performances are all excellent."

"In the end it is conductor Michael Rafferty to whom we should hand the victor’s spoils. He has not only understood the composer’s intent, empathizing with his special soundworld, conveying to young singers and instrumentalists alike how to phrase, how to breathe beauty into fragments, how to imbue a whisper with the power of a scream, but remains meticulously honest and loyal to the score. Here everything was in balance. Finally it was a case of prima la musica e poi le parole."

"Best of all, the Music Theatre Wales Ensemble and conductor Michael Rafferty bring the young Turnage’s score to life in all its scintillating urban brilliance and violence, like neon lights flashing along the Mile End Road on a dark night."

"The Music Theatre Wales Ensemble under Michael Rafferty played Turnage’s score as to the manner born: angry and soulful, biting and tender, urgent and yet offering oases for reflection. Whether called upon to play in conventional terms, to shout, to stamp, or even to strike a pose, there could be no gainsaying the level of artistry on offer from players and conductor alike."

“It was the music – with its elements of jazz and rock as well as Britten and Stravinsky – that delineated the emotional landmarks. Rafferty drew beautifully articulated playing from his musicians, balancing the violence with lyrical tendresse and ensuring that the colours emerging from Turnage’s dark and edgy instrumentation were always telling.”

For You CD recording - Michael Berkeley

In the Penal Colony – Philip Glass

“conducted by Michael Rafferty, the performance was focused and taut. The Music Theatre Wales Ensemble shone in this challenging, finger-exhausting, concentration-sapping score. Catch it on tour.”

"..you'll be hearing Gwion Thomas's orgasmic whooping for joy as he, Punch, slashes and burns and beats his way into immortality. That and the compendium of shrieks and guffaws and cartoonish exclamations from a brilliantly accomplished 15-strong instrumental ensemble under Michael Rafferty." 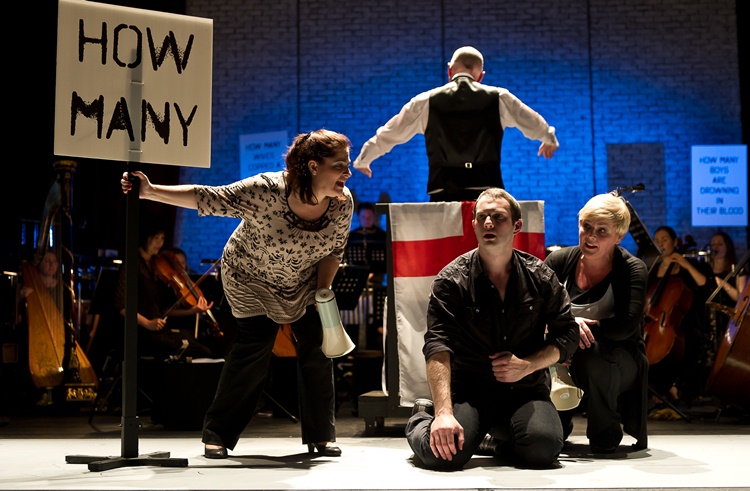 'conducted by Michael Rafferty, the performance was focussed and taut. The Music Theatre Wales Ensemble shone in this challenging, finger-exhausting, concentration-sapping score. Catch it on tour.'